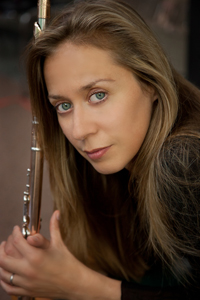 Peabody Conservatory faculty artist Marina Piccinini will explore the spiritual and elegant relationship between Asian and French music at a recital at 7 p.m. on Friday, June 15, in Peabody’s Leith Symington Griswold Hall.

One of the world’s leading flute virtuosos, Piccinini will perform with pianists Araceli Chacon and Colette Valentine. The program includes Sonate pour flute et piano by contemporary Japanese composer Yuko Uebayashi, who lives in Paris; Trois pieces orientales pour flute seule by Pierre-Octave Ferroud, in which the composer, who died in his 30s in 1936, imitates the sound of the traditional Chinese flute; and Sonate No. 1 en A Majeur, op. 13, by Gabriel Faure, written originally for violin in 1876.

“I chose pieces by a Japanese composer and by two French composers to show how the two sides, East and West, have influenced one another in music for the flute,” Piccinini said. “French music has always been very closely associated with the modern flute, embodying principles of color, breath and perfume. While reflecting these concepts, Asian culture maintains a sense of spirit reminiscent of meditation and stillness, as well as the sound of the traditional instruments.”

The recital officially opens the fifth year of the Marina Piccinini International Flute Master Classes at Peabody. This year there will be 25 performing participants, ranging in age from 14 to 59. Selected on the basis of their years of study and performances sampled on CDs, the participants will come to Baltimore from as far away as Austria, Mexico and the United Kingdom.

Piccinini, the first flutist to win an Avery Fisher Career Grant from New York’s Lincoln Center, has been a soloist with the Boston Symphony Orchestra, the London Philharmonic, the Tokyo Symphony and many other leading ensembles. As part of the Detroit Symphony Orchestra’s Festival of Flutes last fall, she was the soloist in a performance of Paquito D’Rivera’s flute concerto Gran Danzon, conducted by Leonard Slatkin. Piccinini has been a faculty artist at Peabody since 2001.