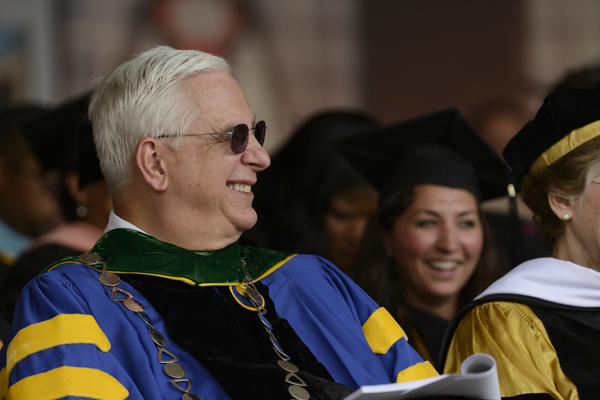 Miller will step down from his post on June 30, ending a distinguished 15-year tenure.

The event will feature many prominent national health leaders and Johns Hopkins senior officials, who will consider the future of academic medicine in terms of patient care, education and research.

Kathleen Sebelius, secretary of the U.S. Department of Health and Human Services, will give a keynote address on the future of American health care, with an introduction and speech by U.S. Sen. Ben Cardin of Maryland. Sebelius is expected to share her thoughts on the unique role that academic medical centers can play in the needed transformation of the American health care system.

Miller, the man of the hour, will bookend the event. A video tribute to the dean will kick off the conference, and Miller will give the event’s closing remarks.

Miller joined Johns Hopkins in March 1994 to serve as director of Anesthesiology and Critical Care Medicine at the School of Medicine. Just two years later, he was tapped to serve as interim dean of the medical faculty and vice president for medicine. Daniel Nathans, then interim university president, saw Miller—who had distinguished himself as a surgeon, researcher, educator and administrator—as uniquely qualified to guide Johns Hopkins through a period of change and challenge in academic medicine. At the time, the growing market power of managed care organizations and reductions in Medicare reimbursements were putting considerable strain on academic medical centers.

Throughout his tenure, Miller has shepherded the organization through transitions and rough times, federal mandates in health care reform and tremendous regional and global expansions, while also encouraging and promoting innovation and excellence.

“Ed leaves behind a remarkable legacy that began 15 years ago with the formation of Johns Hopkins Medicine under a single strategic vision,” said Lloyd Minor, university provost and senior vice president for academic affairs, one of the event’s scheduled speakers. “From patient safety and medical education to diversity and research collaboration, there is no area that has not been impacted by Ed’s transformational leadership and his commitment to excellence and the academic mission. He moved academic medicine forward by leading the way here at Hopkins.”

Miller’s accomplishments are both many and profound, in scope and in impact.

He oversaw one of the nation’s largest hospital construction projects, a just-opened $1.1 billion clinical building with two towers: the Sheikh Fayed Cardiovascular and Critical Care Tower and the Charlotte R. Bloomberg Children’s Center.

His tenure included the founding at Johns Hopkins of many research institutes and centers such as the Institute for Cell Engineering, the Center for Innovation in Quality Patient Care, the Robert Packard Center for ALS Research and the McKusick-Nathans Institute of Genetic Medicine.

He forged a partnership with Malaysia, enabling that country to develop its first fully integrated private four-year graduate medical school and teaching hospital.

With an eye to the future, he fostered the development and adoption of the innovative Genes to Society medical curriculum, a six-year undertaking and the first wholesale academic overhaul at the school in two decades.

Christine White, executive assistant to Miller and assistant dean of the School of Medicine, says that Miller’s influence on academic medicine will be lasting.

“This conference is an opportunity for us to acknowledge Ed’s tremendous contributions and to consider the future of academic medicine from the strong foundation he has provided, asking questions such as, What is our role in the ongoing transformation of the American health care system? How can we maintain our commitment to education and safety-net care despite increasing financial constraints? How can we accelerate discovery and its translation from bench to bedside?” she said.

In addition to Sebelius’ keynote address, the conference will feature talks on patient care, research and education, and a panel on the future of the academic medical center, moderated by Provost Minor.

Minor says that academic medicine, once again, finds itself in a time of great change. Nationally, all await the Supreme Court’s decision on upholding the Affordable Care Act. But, he says, whether or not the individual mandate stands, academic medical centers must contend with declining state support, shrinking research dollars and growing demand for accountability and value.

The list of speakers at the event includes Elias Zerhouni, former director of the National Institutes of Health and current president of global research and development at French drug maker Sanofi; Darrell Kirch, president and CEO of the Association of American Medical Colleges; David Blumenthal, chief health information and innovation officer at Partners HealthCare and a professor at Massachusetts General Hospital and the Harvard Medical School; Carol Greider, Nobel Prize winner and the Daniel Nathans Professor and Director of Molecular Biology and Genetics in the Johns Hopkins Institute for Basic Biomedical Sciences; Gail Wilensky, senior fellow at Project HOPE; Karen Davis, president of The Commonwealth Fund; John Colmers, vice president of health care transformation and strategic planning for Johns Hopkins Medicine; and David Nichols, the Mary Wallace Stanton Professor and vice dean for education at the School of Medicine. University President Ronald J. Daniels will introduce Miller and give opening remarks.

The event, which is open to the entire Johns Hopkins community, will be held from 9 a.m. to 4 p.m. today, June 11, in the School of Medicine’s Turner Auditorium. A reception will follow from 4 to 6 p.m. in Turner Concourse.

A video recording and photos of the event will be made available at jhu.edu/provost/mamf.