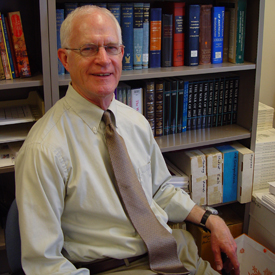 Donald Hickey, editor of the Johns Hopkins Books on the War of 1812 Series.

The War of 1812 has long suffered an inferiority complex. Unluckily wedged between the Revolutionary War and the Civil War, the conflict often gets overlooked and thus earned the nicknames the “forgotten war” and the “Rodney Dangerfield of armed engagements.”

For most Americans, knowledge of the war is limited to the victories of the USS Constitution, the origin of “The Star-Spangled Banner” at Baltimore’s Fort McHenry and Andrew Jackson’s triumph at New Orleans. In short, don’t look for a War of 1812 summer blockbuster movie or first-person shooter for Xbox anytime soon.

Historian Donald Hickey is on a mission to repair this collective oversight and hopes that the fanfare around the war’s bicentennial, and a new book series by the Johns Hopkins University Press, will heighten public interest. Hickey, editor of the Johns Hopkins Books on the War of 1812 Series, has written widely on the conflict, including the highly acclaimed The War of 1812: A Forgotten Conflict and The War of 1812: A Short History, both published by the University of Illinois Press. He most recently authored 187 Things You Should Know About the War of 1812 (JHU Press, 2012) and The Rockets’ Red Glare: An Illustrated History of the War of 1812 (JHU Press, 2011) with co-author Connie Clark.

To promote the book series and the bicentennial, the Johns Hopkins University Press will co-host two events this week, when the national celebration of the war begins.

On Tuesday, June 12, Hickey and other historians will gather for a War of 1812 Workshop, to be held from 9 a.m. to 4 p.m. at the Historic London Town and Gardens in Edgewater, Md.

Hickey and Clark will attend a reception and book talk on The Rockets’ Red Glare at 6:30 p.m. on Wednesday, June 13, at the National Aquarium in Baltimore. The new book includes thrilling stories and stunning illustrations ranging from when the United States declared war on Great Britain in 1812 to the ratification of the Treaty of Ghent in February 1815.

The war broke out following British attempts to restrict U.S. trade and the Royal Navy’s impressment of American seamen. The United States also sought to expand its territory into Canada.

The United States suffered many costly defeats at the hands of British, Canadian and Native American troops over the course of the war, including the capture and burning of Washington, D.C., in August 1814. American troops thwarted British invasions in Plattsburgh, N.Y., Baltimore, and New Orleans, boosting national confidence and fostering a new spirit of patriotism. The ratification of the Treaty of Ghent on Feb. 16, 1815, ended the war but left many key issues unresolved.

The Johns Hopkins Books on the War of 1812 Series currently includes four publications—classic works alongside recent scholarship. Flotilla, by Donald Shomette, tells the story of the Patuxent naval campaign. For nearly two years, the British navy conducted devastating raids on small villages along the shores of the Chesapeake Bay. Then, in 1814, Capt. Joshua Barney led his Chesapeake flotilla against the British, determined to contest their advance on the nation’s capital and drive them from the area. The flotilla ultimately suffered defeat but managed to inflict significant damages on the far-superior British fleet.

Hickey, a professor of history at Wayne State College in Nebraska, has had a fascination with the War of 1812 ever since his days in college. In his books, he seeks to debunk some of the myths of the war and reveal some lesser-known facts, such as the conflict being the first use of the famous Uncle Sam character.

“It was a draw on the battlefield, but I argue that we lost the war because we didn’t achieve our policy objectives,” Hickey says. “The maritime issues that caused the war weren’t even mentioned in the peace treaty.”

The war was significant, he says, as it forced the U.S. military to modernize and grow.

Hickey said that several more books in the series are currently in the works.

For more on the series and upcoming events, go to press.jhu.edu/books/features_series.html.