For the Record: Iglesias installed as Edward J. Schaefer Professor in Electrical Engineering

Pablo A. Iglesias, director of the Johns Hopkins Cellular Signaling Control Laboratory, has been named the Edward J. Schaefer Professor in Electrical Engineering, in the fifth and final Whiting School of Engineering endowed professorship installation of the academic year.

Peter N. Devreotes, professor and director of the Department of Cell Biology at the School of Medicine, introduced Iglesias at the June 4 ceremony, held in Mason Hall, with words that highlighted the collaboration between engineering and medicine.  “Pablo has the rare ability to bridge our two worlds,” Devreotes said. 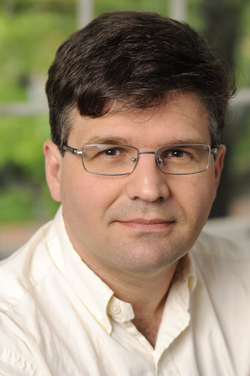 Iglesias, a native of Caracas, Venezuela, focuses on the use of control theory and information theory to study biological signal transduction pathways. He is working to understand how cells interpret directional cues to guide cell motion, the regulatory mechanisms that control cell division, and the sensing and actuation that enable cells to maintain lipid homeostastis.

Iglesias received his doctorate in control engineering from the University of Cambridge in 1991. He then joined the faculty of Johns Hopkins, where he is a professor in the Department of Electrical and Computer Engineering with joint appointments in Biomedical Engineering and Applied Mathematics and Statistics. During the 2012–13 academic year, he will be on sabbatical at the Max Planck Institute for the Physics of Complex Systems in Dresden, Germany.

Filed under Around Hopkins, People, Recognition, Whiting School of Engineering