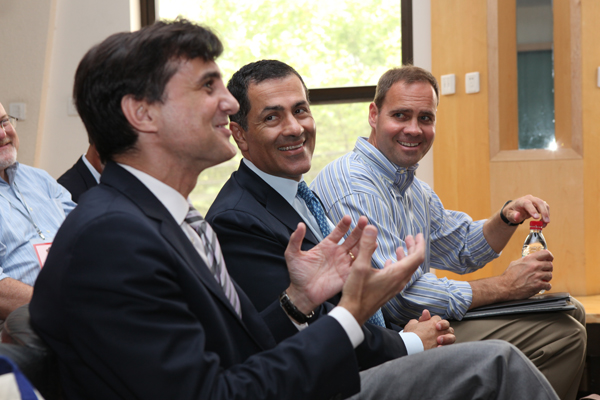 The festivities kicked off on June 15 with the center’s annual commencement ceremony, where Daniels had the opportunity to address the nearly 130 members of the class of 2012 and greet each of them, along with Nanjing University Chancellor Hong Yinxing, as they crossed the stage to receive graduate certificates and master’s degree diplomas.

Daniels spoke to the graduates about the ambitious and unprecedented plans to create this one-of-a-kind partnership developed more than a quarter-century ago by then JHU President Steven Muller and then Nanjing University President Kuang Yaming. “Somehow, with great foresight, they envisioned a place where proximity, commonalities and a shining academic mission would open new horizons to the next generations of American and Chinese leaders. Today, you are all the products of that vision. Your work here exemplifies both the hopes of these two men and the best version of the future relationship between our two nations.”

The center, with a community of more than 2,100 alumni worldwide, is a postgraduate educational joint venture between Johns Hopkins and Nanjing universities, providing approximately 180 students from the United States and other countries, and China, the opportunity to live and study together. American and international students take the majority of their classes in Mandarin, while Chinese participants study mostly in English. 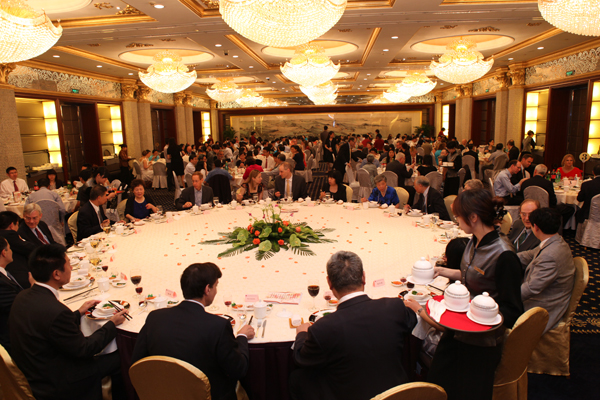 Traditional Chinese banquets were among the weekend’s activities, which also included forums and class dinners. Nearly 250 of the 350 attendees were alumni of the center, who came to Nanjing from around the world.

Nearly 250 of the 350 attendees of the anniversary celebration were alumni of the center, who came to Nanjing from around the globe for a packed weekend of forums, class dinners, student presentations, traditional Chinese banquets—and even a few cups of coffee at favorite neighborhood hangouts—to reminisce about their unique shared academic and cultural experience.

The gathering also served as an opportunity to bring together and recognize many of the American and Chinese co-directors who have worked as the center’s lead administrators on the ground in Nanjing throughout the years.

Among the festivities was the formal launch of the Hopkins-Nanjing Council, an advisory body chaired by former JHU President William R. Brody and “composed of professionals from all walks of life who are deeply committed to the center’s future,” said Jason Patent, American co-director of the Hopkins-Nanjing Center. Brody and his wife, Wendy, were among the attendees.

Yan Cunlu, a 1993 HNC graduate who now serves as president of Autocraft Industrial (Shanghai) Ltd., spoke at the June 16 anniversary ceremony as the representative of the center’s Chinese alumni. “My year at the center influenced me deeply,” Yan said. “At the center, you cultivate a new way of thinking. … This learning experience made me realize that no matter how different people are, you can build friendships—and solve problems through these friendships.”

Kenneth Jarrett, a 1989 HNC graduate and chairman of APCO Worldwide’s Greater China Region, echoed Yan’s sentiments when speaking on behalf of his fellow international alumni: “This auditorium is filled with countless examples of individuals whose personal and professional lives have been enriched by their time at the center,” he said. “That was certainly the case for me.”

Daniels noted that Johns Hopkins often receives inquiries from other U.S. universities seeking to form partnerships in China. “Twenty-five years into its history, with its focus on rigorous graduate education and cultural immersion, the Hopkins-Nanjing Center still stands as the gold standard,” he said. “This center represents a true collaboration between two of the top universities in their respective countries; it is a collaboration that has withstood both the test of time and the rough patches of U.S.-China relations.”

Wang remarked that the two university presidents, Muller and Kuang, confronted many challenges in 1986, when official relations between China and the United States did not even exist. “In this light, the birth of the Hopkins-Nanjing Center was nothing short of miraculous,” he said. “Fast forward 25 years: Today our two economies are inextricably linked. There are some who may see China’s rise as a threat to the United States and see us as competitors locked in a zero-sum game. But reality is much different, and the continued existence of the center is proof of that.”

Filed under Academic Centers and Affiliates, Around Hopkins, Events, Featured