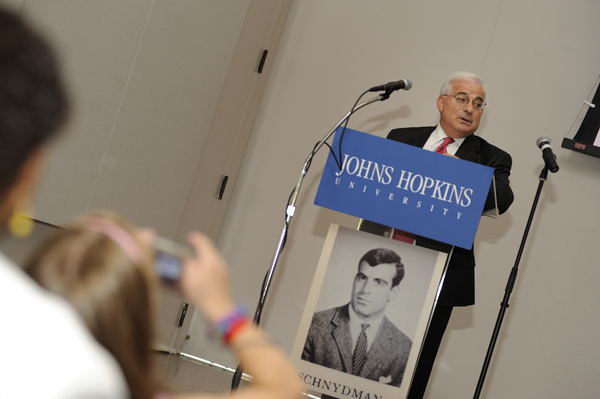 One of Schnydman’s grandchildren snaps a shot of him at the podium that showcases a portrait from his Johns Hopkins undergraduate days.

The university has said goodbye to its go-to guy, but wants to make sure he’s not forgotten.

Generations of students and staff have come to know Jerome “Jerry” Schnydman, a beloved and admired figure on campus who forged a legend on the lacrosse field nearly 40 years ago and then gave his alma mater more than three decades of distinguished service benefiting undergraduates, alumni, trustees and the Office of the President.

On June 30, Schnydman retired from his posts as executive assistant to the president and secretary of the board of trustees. Johns Hopkins wants to ensure that future generations will recognize his name and decades of contributions.

On the eve of Schnydman’s retirement, the university announced that the atrium of the Brody Learning Commons—a new Sheridan Libraries facility on the Homewood campus set to open later this summer—will be named the Schnydman Atrium. A plaque and signage will be installed inside the space to commemorate the honor.

The announcement was made at a retirement celebration event held for Schnydman June 28 in the Glass Pavilion on the Homewood campus.

The Brody Learning Commons is a four-story building located adjacent to the Milton S. Eisenhower Library. It is designed to foster collaborative learning and will include a quiet reading room, 16 group study rooms, an atrium and a cafe. The three-story, natural-light-filled atrium will have movable furniture to allow students to study in groups or sit and read by themselves.

The building is named in honor of William R. Brody, the 13th president of the university, and his wife, Wendy. Schnydman worked closely with President Brody for a decade, and the two forged a powerful partnership and friendship.

Winston Tabb, Sheridan Dean of University Libraries and Museums at Johns Hopkins, says that the honor is both well-deserved and fitting.

“Through his long career and in the many roles he played, Jerry touched the lives and connected generations of students, faculty, staff, parents, alumni and friends of The Johns Hopkins University,” he says. “The atrium space will be a central gathering point at Johns Hopkins for both social and scholarly purposes, so we are tremendously pleased to be able to honor Jerry in this uniquely appropriate way.”

Schnydman first came to Johns Hopkins in 1963 as an undergraduate and during his student career cemented his place in Blue Jays and lacrosse lore. He served as co-captain of the 1967 national championship team and was selected in 1966 and 1967 as a first team All-American. He is a member of the National Lacrosse Hall of Fame and the halls of fame for the Greater Baltimore Chapter of the Lacrosse Foundation, Johns Hopkins and Baltimore City College High School.

Following his 1967 graduation and an eight-year career in the insurance and pension business, Schnydman returned to Johns Hopkins to join the Office of Undergraduate Admissions, working his way from assistant director to director, a post he held for nearly 11 years. He next served as executive director of Alumni Relations, from 1989 to 1998, when he assumed his positions of executive assistant to the president and secretary of the board of trustees.

Richard S. Frary, a university trustee who has known Schnydman for more than 45 years, says that his friend was born to play the role he served with the trustees and in the President’s Office.

“Jerry literally knows everyone: faculty, staff, students, politicians, community members,” Frary says. “He became the point of contact for anyone who had a question about Johns Hopkins. Alums would come to him. Faculty would call on him if there was an issue. Politicians would check in to see what was going on about a particular matter. Jerry was just central to everything that was going on at any given time at the university.”

Frary, a 1969 graduate of the School of Arts and Sciences, says that he quickly came to respect the man he first met in 1965.

“Jerry had time for everyone. He has a huge heart and almost no ego. He cares deeply about the people around him and loves the university,” Frary says. “I remember when he got the job as secretary of the board of trustees, he nearly broke down in tears. For him, it was a life’s dream come true. He’s just a humble man with amazing interpersonal abilities.”

In addition to the atrium, a scholarship called the Jerome D. and Tamara Schnydman Fund has been created to honor Jerry and his wife, Tammy. To date, $1.6 million has been donated to the fund, which will be available to Homewood undergraduates of merit who apply for financial assistance.

Schnydman says he was both surprised and humbled by the honors.

“I am astonished, excited and so thankful,” he says. “It really is beyond my wildest dreams. I, myself, was a scholarship student, so to have my name and my wife’s name linked with a scholarship to help future needy students is just unbelievable. As for the atrium, I had a wonderful relationship with Bill Brody, so to have my name linked with that building is beyond what I ever expected and deserved. It’s unbelievable.”

Schnydman says he clearly recalls, like it was yesterday, that day in 1963 when, as a high school senior, he made his way up 33rd Street to Shriver Hall to be interviewed by the university’s Office of Admissions.

“I just hoped I’d make the lacrosse team,” he says. “So now to look back and take in all of this, I get chills.” 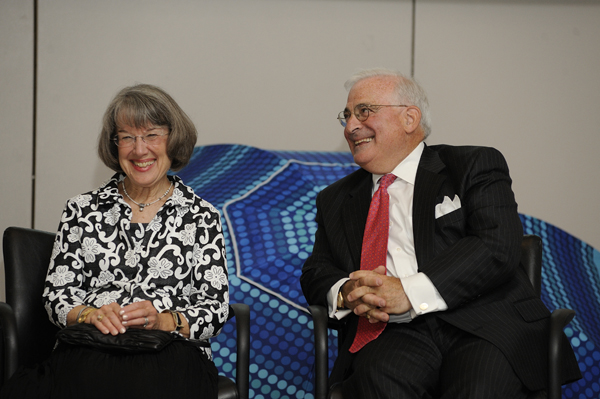 Jerry Schnydman and his wife, Tammy, at the retirement event where a scholarship in their name was announced. The atrium in the Brody Learning Commons will also bear his name.