They were what they ate: Pre-humans ate only forest foods

You are what you eat, as the saying goes, and that seems to have been as true 2 million years ago, when pre-human relatives were swinging through the trees and racing across the savannas of South Africa, as it is today.

A study published June 27 in the journal Nature reveals that Australopithecus sediba, an apelike creature with human features living in a region about 50 miles northwest of today’s Johannesburg, consumed exclusively fruits, leaves and other forest-based foods, even though its habitat was near a grassy savanna with its rich variety of savory sedges, tasty tubers and even juicy animals.

“This astonished us,” says Benjamin Passey, a Johns Hopkins University geochemist on the international team that conducted the study. “Most hominin species appear to have been pretty good at eating what was around them and available, but sediba seems to have been unusual in that, like present-day chimpanzees, it ignored available savanna foods.” 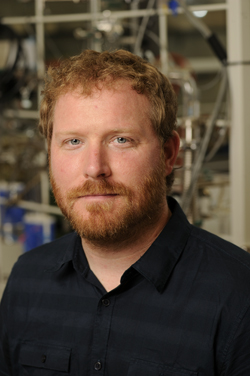 These new findings add detail to the emerging picture of our various pre-human relatives, and why some thrived and continued to evolve, while others became extinct.

“We know that if you are a hominin, in order to get to the rest of the world, at some point you must leave the forests, and our ancestors apparently did so,” Passey said. “The fates of those that did not leave are well-known: They are extinct or, like the chimpanzee and gorilla today, are in enormous peril. So the closing chapter in the story of hominin evolution is the story of these ‘dids’ and ‘did nots.’”

In order to learn what these 4-foot-tall, small-brained, bipedal beings had for dinner most nights 2,000 millennia ago, Passey wielded a laser to extract and vaporize infinitesimal bits of fossilized tooth enamel from two Au. sediba individuals.

He then used a mass spectrometer to detect, in the vapor, the ratio of two forms of carbon (called isotopes): carbon-12 and carbon-13. These chemical “fingerprints” became locked into the sedibas’ enamel in their youth, as their teeth formed. A reading heavy in carbon-12 indicates a diet comprising mostly forest foods, such as leaves and fruits, and a reading heavy in carbon-13 signals a diet that includes larger amounts of savanna foods such as seeds, roots and grasses.

“We study tooth enamel because it’s the hardest mineral in the body and preserves its chemical and isotopic signatures over time, so it has a lot to tell us,” Passey explains. “We couldn’t get the same analysis from a bone fragment, for instance, because it will be affected by the composition of the soil surrounding it.”

Passey and the team concluded that Au. sediba consumed between 95 and 100 percent forest-based foods, despite other foods easily available to them.

Why is this important to know?

“Well, one thing people probably don’t realize is that humans are basically grass eaters,” he said. “We eat grass in the form of the grains that we use to make breads, noodles, cereals and beers, and we eat animals that eat grass. In America, we eat animals that are fed corn, and corn is grass, albeit one with an incredible history of human selection. So when did our addiction to grass begin? At what point in our evolutionary history did we start making use of grasses? Eating grasses is a hallmark of humanity, and we are simply trying to find out where in the human chain that begins.”

Passey’s work was funded by the National Science Foundation, and other team members were supported by the Smithsonian, the Malapa Project at the Institute for Human Evolution at the University of Witwatersrand, the Max Planck Society, the U.S. Department of State Fulbright Scholarship Program, the Leakey Foundation, the University of Colorado’s Dean’s Fund for Excellence, the Paleontological Scientific Trust (South Africa) and the South African Department of Science and Technology, the Wenner-Gren Foundation, the Ray A. Rothrock Fellowship and the International Research Travel Assistance Grant of Texas A&M University.

To see a video of Passey talking about the discovery, go to youtube.com/watch?v=6IaZwDavDDI.