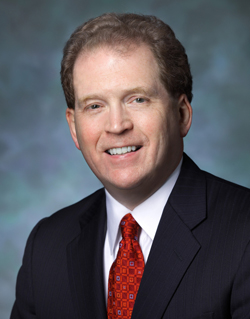 In his three years as provost, Minor has brought considerable energy, imagination and intellect to the office, said President Ronald J. Daniels.

“Lloyd has been deeply committed to the idea that the provost, as chief academic officer, should be the guardian of, and champion for, the highest academic standards and aspirations in the university’s research, teaching and service mission,” Daniels said. “He has been a dedicated advocate for the roles that interdisciplinary scholarship and teaching play in advancing our mission.”

“Lloyd Minor is an exceptional researcher, clinician and academic administrator. Stanford is extremely fortunate to have been able to recruit someone with his outstanding talents and experience to lead our School of Medicine,” Etchemendy said. “In partnership with our hospital leadership, he will take Stanford Medicine to new levels of clinical and research excellence.”

Minor will leave Johns Hopkins at the end of August and spend the next several months transitioning to Stanford before taking office Dec. 1. He will succeed Philip Pizzo, who has led the school since April 2001.

Minor will lead more than 1,500 faculty and 1,000 students at the Stanford School of Medicine, the oldest medical school in the West.

“It is a wonderful honor to be asked to lead the Stanford School of Medicine—one of the truly pre-eminent medical schools in the world—and I am tremendously excited by this unique opportunity to advance state-of-the-art medical research that crosses and combines traditional medical disciplines and academic boundaries in unprecedented new ways,” Minor said.

At Johns Hopkins, Minor’s accomplishments have been many.

As a faculty member, he rose in just 10 years from newly appointed assistant professor to director of the School of Medicine’s Department of Otolaryngology–Head and Neck Surgery. In conjunction with colleagues, he drove a 50 percent increase in departmental research funding and a 30 percent rise in clinical activity, while strengthening performance in teaching and student training.

As provost, he has instituted regular externally led reviews of schools and departments throughout the university. He realigned the structure and focus of Homewood Student Affairs with key university priorities, and involved trustees, through a new Committee on Student Life, in an examination of issues such as student yield, satisfaction and retention.

He also helped launch the Gateway Sciences Initiative, a major ongoing effort to enhance the teaching of introductory science courses at the undergraduate and graduate levels.

“Lloyd has been my indispensable partner in so many different activities that go to the core of the university’s academic enterprise. We will miss him,” Daniels said.

Minor is an expert in balance and inner-ear disorders, with more than 140 published articles and chapters. Through neurophysiological investigations of eye movements and neuronal pathways, his work has identified adaptive mechanisms responsible for compensation to vestibular injury in a model system for studies of motor learning (the vestibulo-ocular reflex). The synergies between this basic research and clinical studies have led to improved methods for the diagnosis and treatment of balance disorders. In recognition of his work in refining a treatment for Meniere’s disease, Minor received the Prosper Meniere Society’s gold medal in 2010.

In the medical community, Minor is perhaps best known for his discovery of superior canal dehiscence syndrome, a debilitating disorder characterized by sound- or pressure-induced dizziness. In 1998 Minor and colleagues published a description of the clinical manifestations of the syndrome and related its cause to an opening (dehiscence) in the bone covering the superior canal. He subsequently developed a surgical procedure that corrects the problem and alleviates symptoms.

The university soon will launch a national search to identify the university’s 14th provost. Jonathan A. Bagger, the Krieger-Eisenhower Professor of Physics and Astronomy in the School of Arts and Sciences and, since 2008, vice provost for graduate and postdoctoral programs, will serve as interim provost beginning Sept. 1.

Filed under Around Hopkins, University Administration