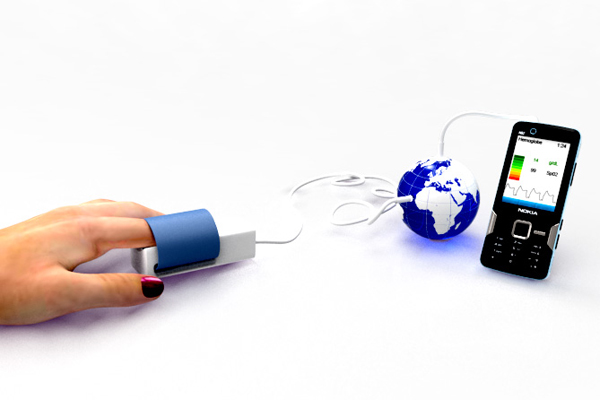 This conceptual image illustrates how the HemoGlobe device would connect with a health worker's cellphone.

Could a low-cost screening device connected to a cellphone save thousands of women and children from anemia-related deaths and disabilities?

That’s the goal of Johns Hopkins biomedical engineering undergraduates who say they’ve developed a noninvasive way to identify women with this dangerous blood disorder in developing nations. The device is designed to convert the existing cellphone lines of health workers into a “prick-free” system for detecting and reporting anemia at the community level.

The students’ project, HemoGlobe, recently received a boost when it was awarded a $250,000 seed grant in the Saving Lives at Birth: A Grand Challenge for Development competition. The event, which attracted more than 500 entrants from 60 countries, was sponsored by prominent global health organizations, including the U.S. Agency for International Development and the Bill & Melinda Gates Foundation. Only 12 entrants were awarded seed grants.

“When we thought about the big-name corporations and nonprofit groups we were competing against, we were amazed and surprised to find out that our team had won,” said team member George Chen, a sophomore majoring in biomedical engineering.

Acharya, an assistant research professor in the Department of Biomedical Engineering, said that the Saving Lives win showed that his students had taken an important step toward reducing anemia-related deaths in developing countries. “This device has the potential to be a game changer,” Acharya said. “It will equip millions of health care workers across the globe to quickly and safely detect this debilitating condition in pregnant women and newborns.”

The undergraduates he supervised spent a year brainstorming and building a prototype for a biomedical engineering design team class. The $250,000 will allow the students to refine their technology, as well as support field testing next year in Kenya by Jhpiego, a Johns Hopkins affiliate that provides global health training and services for women and their families. Jhpiego sponsored the HemoGlobe project through a partnership with the university’s Center for Bioengineering Innovation and Design.

Team member Greenbaum, a senior majoring in biomedical and electrical engineering, has continued working on the anemia system this summer. “The first year we just focused on proving that the technology worked,” he said. “Now, we have a greater challenge: to prove that it can have a real impact by detecting anemia and making sure the mothers get the care they need.”

The student inventors were looking for a new way to curb a stubborn health problem in developing nations. Anemia occurs when a person has too few healthy red blood cells, which carry critical oxygen throughout the body. This is often due to a lack of iron, and therefore a lack of hemoglobin, the iron-based protein that helps red blood cells store and release oxygen. Anemic mothers face many complications before and during birth, including death from blood loss after the delivery. In addition, a baby that survives a birth from an anemic mother may face serious health problems.

Global health researchers estimate that that anemia contributes to 100,000 maternal deaths and 600,000 newborn deaths annually. Health officials in developing countries have tried to respond by making iron supplements widely available. But, according to Acharya, the problem of anemia remains intractable. “So we looked at it from a different angle,” he said.

In places where medical care is easily accessible, doctors routinely test pregnant women for anemia and prescribe treatment, including routine iron supplementation. But in developing regions, where medical help is not always nearby, the condition may go undetected. However, community health workers with limited training do serve these areas.

The sensor, placed on the patient’s fingertip, shines different wavelengths of light through the skin to measure the hemoglobin level in the blood. On their phone’s screen, community health workers will quickly see a color-coded test result, indicating cases of anemia, from mild to moderate and severe.

If anemia is detected, women would be encouraged to follow a course of treatment, ranging from taking iron supplements to visiting a clinic or hospital for potentially lifesaving treatments. After every test, the phone would send an automated text message with a summary of the results to a central server, which would produce a real-time map showing where anemia is prevalent. This information could facilitate follow-up care and help health officials allocate resources where the need is most urgent.

The HemoGlobe student inventors have estimated that their cellphone–based systems could be produced for $10 to $20 each. A provisional patent covering the invention has been obtained through the Johns Hopkins Technology Transfer Office.

In addition to Chen, Greenbaum and Rubin, Whiting School of Engineering students who have participated on the team are Guilherme Barros, William Chen, Judy Doong, Phillip Oh and David Yin.