A week to be green at JHU 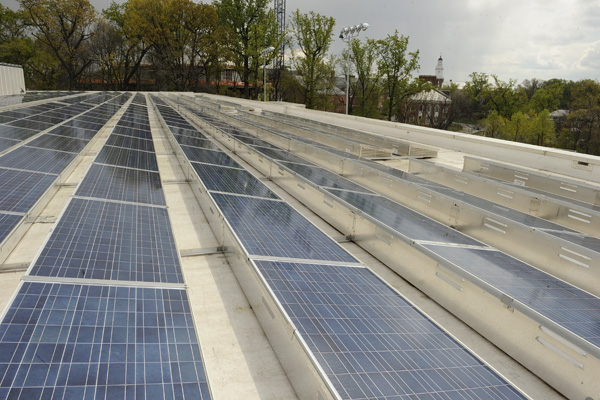 Solar panels on the roof of the Newton H. White Athletic Center are among the 2,908 that have been installed on the Homewood and East Baltimore campuses. Photo: Will Kirk/Homewoodphoto.jhu.edu

The naked eye may not see it, but Johns Hopkins has turned several shades of green of late. Call it Earth-friendly higher education.

Since 2005, the university has reduced its water consumption by 114,070 gallons annually, even while expanding in size in both population and number of buildings, and recently surpassed its goal of recycling 35 percent of recyclable items, with the School of Medicine leading the way with a 55 percent rate.

The 1-e Nightwatchman Program, a computer power management system used by IT services at all campuses, has reduced electrical consumption and reduced carbon dioxide emissions universitywide by 396 metric tons this past year.

The university also has installed 2,908 solar panels on buildings on the Homewood and East Baltimore campuses, a renewable power source that will generate some 1 million kilowatt hours of electricity when fully operational.

To highlight these and other ongoing green programs, and to strengthen Johns Hopkins’ commitment to sustainability, the university will celebrate national Earth Week with a series of more than 40 events across five campuses under the name One Hopkins, One Earth.

Earth Week kicks off this morning with an electronics recycling drive on The Beach in front of the Milton S. Eisenhower Library on the Homewood campus. Later today, Josh Fox, the Academy Award–nominated director of the natural gas fracking documentary called Gasland, will give a talk at noon in Sommer Hall at the Bloomberg School of Public Health in East Baltimore.

The rest of the week will feature seminars, workshops, movie screenings, recycling and donation drives, tours and other activities.

The size and scope of the university’s Earth Week celebration have more than doubled from last year, with the Peabody Institute and the Carey Business School participating for the first time.

Joanna Calabrese, sustainability coordinator for the Office of Sustainability, said that a main goal of One Hopkins, One Earth is to unify the campuses around sustainable practices.

“The events this week will demonstrate sustainability in action,” Calabrese said. “Participants can learn about these issues and find out what is happening on their campus and others related to recycling, renewable energy, healthy food and other topics from a regional and global perspective.”

A signature event of the week will be the JHU Green Buildings Town Hall, hosted by the Sustainable Hopkins Infrastructure Program, to be held from 5 to 6:30 p.m. on Tuesday, April 17, in Room 110 of Homewood’s Maryland Hall. Engineers and designers from Homewood Design and Construction will update the community on efforts to reduce the university’s carbon footprint and to conserve natural resources by both renovating buildings and designing sustainable aspects for new ones.

Of note, the 97-year-old Gilman Hall recently received LEED Silver certification status after its extensive three-year renovation. During the construction process, crews salvaged building materials, including marble slabs and wood doorframes and transoms, and the renovation included ample use of recycled products. The building was outfitted with low-flow plumbing fixtures to conserve water, high-performance windows, heat-recovery units, fluorescent bulbs and rooms with occupancy sensors to automatically shut off lights when the last person leaves.

Anne Roderer, a facilities architect and a panelist at the upcoming Green Buildings Town Hall, said that the event will let attendees hear about the Office of Facilities Management’s long-term goals and strategies to fulfill its part of the university’s Implementation Plan for Advancing Sustainability and Climate Stewardship, signed by President Ronald J. Daniels in spring 2010. The ambitious effort calls for the university to cut emissions of climate-changing carbon dioxide gas by more than half from projected levels by 2025. The plan encompasses research, education and community outreach in addition to greenhouse gas reduction.

Roderer said that a lot of work has already been done to campus buildings to achieve energy and water savings, both big and small. She mentioned installing energy-efficient lighting and conservation-friendly water fixtures and replacing fume hoods in labs. The Cordish Lacrosse Center, set to open later this year, will feature a green roof for storm water mitigation.

“We’re trying to improve the efficiency of building systems throughout the Homewood campus,” Roderer said. “We have sustainability goals including LEED requirements, for each new capital project we work on. We are strategically improving the performance of our buildings and implementing sustainable practices.”

Other events this week include a sustainability career and internship panel and networking session, tours of Johns Hopkins’ two new community gardens, a Toxic Tour of Baltimore, tree plantings and urban gardening throughout the city, a panel on lead remediation, a tap vs. bottled water tasting challenge, composting workshops, a Green Carnival in the Gilman Hall atrium and a Healthy Planet Festival at Spring Fair.

More than 15 groups worked together to sponsor these events, including several student organizations.

Calabrese said that she hopes the week serves as an eye-opener for many.

“We hope attendees can learn something new and want to learn even more,” she said. “Sustainability is a group effort.”

For a full list of events, go to sustainability.jhu.edu/projects/earthweek.html.