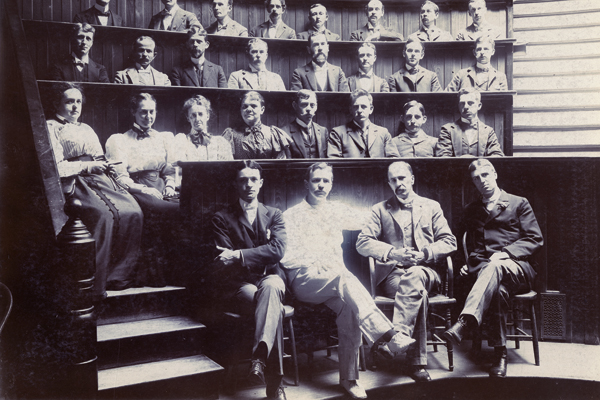 In 1875, the newly formed Johns Hopkins Hospital board of trustees selected John Shaw Billings to spearhead construction of the hospital that would bear the name of the prominent Baltimore merchant and banker who had left a $7 million bequest that would also fund the creation of The Johns Hopkins University.

Billings, a former Union Army battlefield surgeon, was considered one of the country’s foremost experts on hospital design and management. At the request of the board, Billings took a three-month tour of Europe to consult with educators and visit hospitals and medical schools. He came back unimpressed.

“It cannot be said that the general principles of hospital construction are as yet settled on any scientific basis … nearly as many opinions as persons,” he wrote to the trustees.

Billings turned to the wisdom of another expert, one Florence Nightingale, then 56 and mostly bedridden with various ailments. He mailed Nightingale sketched plans of the hospital and associated training school for nurses, convalescent hospital and asylum for African-American orphans—all spelled out in Hopkins’ bequest. Nightingale responded six weeks later with 12 pages of notes on the sketches as well as other materials. He took her advice to heart as he set out to create a state-of-the-art medical facility unlike any other.

In the 13-year period it took to design and build The Johns Hopkins Hospital, Billings overlooked no detail.

The same can be said for the new book Leading the Way: A History of Johns Hopkins Medicine, an exhaustive and well-chronicled telling of how one man’s wish changed the face of medicine forever.

The book is authored by Neil A. Grauer, an assistant director of editorial services in the Johns Hopkins Medicine Office of Marketing and Communications, which published it. Grauer took three and a half years to research a work that takes its readers from the formative years of Johns Hopkins the man to today.

He interviewed more than 30 leaders of Johns Hopkins Medicine, past and present, and spent countless hours of research time in the Alan Mason Chesney Medical Archives. The result is a 400-page book lavishly illustrated with more than 400 photographs.

The book’s release was timed to coincide with the dedication of Johns Hopkins Medicine’s newest state-of-the-art facilities: The $1.1 billion Sheikh Zayed Cardiovascular and Critical Care Adult Tower and The Charlotte R. Bloomberg Children’s Center, which together total 1.6 million square feet.

Leading the Way, the first comprehensive history of Johns Hopkins Medicine in more than 20 years, recounts the achievements and impact of Johns Hopkins physicians, researchers, teachers and students since the hospital’s opening in 1889.

The book’s first chapter, “The First 50 Years,” spends ample time on the lives and work of pathologist William Henry Welch, surgeon William Stewart Halsted, internist William Osler and gynecologist Howard Atwood Kelly—famously known as “The Big Four.” These four outstanding and forward-thinking physicians would serve as the founding staff of the hospital and guide the creation of the School of Medicine.

Grauer points out the strengths, weaknesses and utter humanness of these storied men. In the section on Welch, Grauer details the many accomplishments of the brilliant educator and researcher—who would later found what is now the Bloomberg School of Public Health—with amusing asides such as that the lifelong bachelor was called “Popsy” by many students and loved a big breakfast, desserts and vacations in seaside resorts. While Halsted is largely recognized as the father of modern surgery and a giant in his field, he carried with him a debilitating addiction to cocaine that caused him to spend a year in a sanitarium before joining Johns Hopkins and would haunt him most of his later professional life.

Throughout its history, Johns Hopkins Medicine has left an indelible mark on both clinical practice and medical education. Grauer writes about the pioneering work of generations of Johns Hopkins clinicians and researchers, including the “blue baby” technique to repair a heart defect, which paved the way for modern heart surgery; the invention of the first implantable, rechargeable pacemaker for cardiac disorders; the development of the first effective treatment for sickle cell anemia; and countless other achievements that have garnered for Johns Hopkins physicians and researchers such recognition as MacArthur Foundation “genius” awards, Lasker Awards, National Medals of Science, Presidential Medals of Freedom and Nobel Prizes.

In all, the book advances understanding of why Johns Hopkins has risen to and maintained its status as the best-known health care institution in the world, with The Johns Hopkins Hospital being named the nation’s best by U.S. News & World Report for 21 consecutive years and chosen as the subject of two award-winning television documentaries.

The book, written for a general audience, chronicles the extraordinary expansion, triumphs and challenges of the past two decades, including the creation of dozens of multidisciplinary research institutes and centers to expand the frontiers of research in such wide-ranging fields of study as genetic medicine, biomedicine, cell engineering, cardiovascular care, ALS and patient safety. It also covers the new medical school curriculum, the founding of Johns Hopkins Medicine International and the prospects for the future.

In trying to explain the measure of medical success achieved at Johns Hopkins, Grauer says that a key word kept coming up repeatedly in his research and interviews, “collegiality.”

“Here, everybody is interested in the success of everyone else, not only doing the best you possibly can but helping colleagues do the same,” he says. “That collegial philosophy goes all the way to the beginning. It was installed by the founders and exists today. It’s the spirit of the place.”

Grauer, a 1969 graduate of The Johns Hopkins University, has written for American Heritage, Smithsonian, The Baltimore Sun, The Washington Post and many other publications. Among his seven books are Remember Laughter: A Life of James Thurber, Centuries of Caring: The Johns Hopkins Bayview Medical Center Story, Wits and Sages and Lacrosse: Technique and Tradition (co-authored with Johns Hopkins lacrosse coach David Pietramala).

Leading the Way is available for order on the Johns Hopkins University Press website, press.jhu.edu, and elsewhere.