Burma’s minister of health gives talk at the Bloomberg School 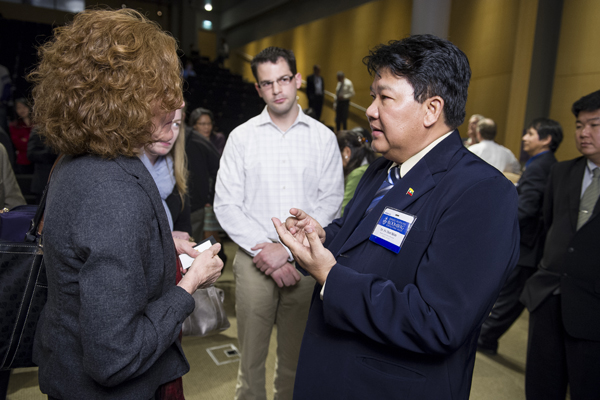 The monumental task of fixing the health system of Burma (Myanmar) falls to the minister of health, Pe Thet Khin, who shared some of the challenges ahead with a Bloomberg School audience on April 10.

Pe Thet Khin and other health officials from the country came to the school as part of a weeklong visit to Johns Hopkins University at the invitation of President Ronald J. Daniels. The focus of the trip—which came a week after Burmese opposition leader Aung San Suu Kyi was elected to parliament—is to explore potential partnerships between Johns Hopkins and Burma’s ministry of health to improve the country’s health care system.

“I’m hoping during our short visit to identify areas for collaboration and support, especially in the promotion of public health activities,” as well as in areas of clinical medicine, Pe Thet Khin said.

In his opening remarks, Bloomberg School Dean Michael J. Klag said that the occasion is the first time in 50 years, according to the State Department, that a government minister from Burma has come to the United States.

“There’s great promise in Myanmar, and Pe Thet Khin serves as a great symbol of that promise,” Klag said.

Pe Thet Khin, a practicing pediatrician for many years, said that he has two overriding goals: to enable citizens to reach their life expectancy and to ensure that every citizen is free from disease.

In his talk, he cited some of his country’s most pressing challenges: a severe shortage of health care workers and qualified health educators, inadequate health care facilities and substandard maternal and child health care.

“We need to have a strong, well-trained and motivated workforce,” said Pe Thet Khin, who characterized the quality of health care education in his country as “compromised,” a word he also used to describe the health care provided at the more than 900 medical facilities throughout the country.

He said that a top priority is improving services to mothers, infants and children, especially in the rural areas where 70 percent of the population resides.

Despite the enormity of the challenges before him, Pe Thet Khin said that he is encouraged by the opening three years ago of a postgraduate public health school in his country and by discussions with Johns Hopkins officials about students from Burma taking a summer epidemiology course at the Bloomberg School in the future.

Going forward, Pe Thet Khin said, the greatest impediments to health system reform may be the national mindset of following orders under years of authoritarian rule, and convincing people—including his colleagues in the medical field—to begin thinking for themselves.

“We are still a fledgling democracy,” he said. “We’d like to ask you people around the world to be patient. We are not used to these democratic freedoms.”