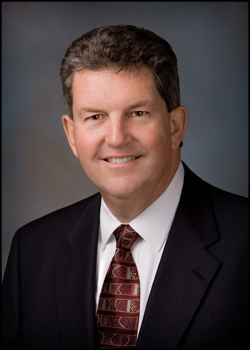 Patrick R. Donahoe, postmaster general and CEO of the United States Postal Service, will be the featured speaker for the Johns Hopkins Carey Business School’s Leaders + Legends lecture series on Wednesday, April 18. The event will take place at 7:30 a.m. in the Legg Mason Tower in Harbor East.

Donahoe, whose remarks are titled “The State of the U.S. Postal Service,” was named the 73rd postmaster general of the country in October 2010. A 35-year postal veteran who began his career as a postal clerk in Pittsburgh, he reports to the Postal Service board of governors.

As chief operating officer, Donahoe was instrumental in the Postal Service’s achieving record levels of service and customer satisfaction, significant workplace improvements and seven straight years of productivity gains. The U.S. Postal Service has annual revenues of $68 billion and delivers nearly half the world’s mail.

The Leaders + Legends lecture series, which features today’s most influential business and public policy leaders addressing topics of global interest and importance, is designed to engage business and community professionals in an examination of the most compelling issues and challenges facing society today.